The Caquetá region marks the gateway into the expansive Colombian Amazon rainforest. A river of the same name travels 2,820 kilometers from its source in the Andes, through vast areas of isolated jungles, continuing into Brazil, where it joins the mighty Amazon river. Here, you can also find the world’s biggest rainforest protected area, Serrana de Chiribiquete. It is one of the least explored and most biodiverse places on Earth, holding various habitats. The western part of Caquetá has been destroyed for cattle, but the east remains undisturbed and hosts a virgin jungle. To get here, the only real possibilities are boat or plane. Welcome to the first part of my journey into the Amazon rainforest, on a mission to record the sounds of this hidden world.

This was my first journey to the Amazon, and to South America in general. I wanted to reach the rainforest without flying over land. That wasn’t so straightforward, as a big part of what used to be a virgin jungle is now being replaced by cattle farms. I was traveling with my bicycle (yes, you read that right) packed with all my camping and audio recording gear. Beforehand, I couldn’t obtain any official information in Colombia about this area, so everything was pretty unclear – but I was determined to find a way. Studying maps and locating a possibly accessible area was the first step to reaching the vast Amazon rainforest. I began in the city of Florencia. Being on my own and not speaking the language didn’t help, but after a few busy days, I gathered some real information and ended up finding a possibility: there was an express boat going down the Río Caquetá to a remote town far away in Amazonia.

Taking the boat on the Río Caquetá

After finding out all the details, I went to a little port not far from Florencia to take a small local boat transporting passengers to remote settlements in the Amazon. We secured my bicycle to it and I joined the locals inside. After five hours of racing down the river, with the captain finding deep channels and avoiding obstacles, we finally reached the remote town called Solano. After such a wild ride, I was grateful to step back onto the stable ground – and couldn’t believe that I was actually there! After being welcomed by this unknown town, I started looking for a room to stay in and use as a base. Yes, believe it or not, there were hotels, markets, bars, and restaurants in this remote place.

The “hotel” I found wasn’t five-star, but it was a place to stay. in such a remote place, where few foreigners are seen, I was quite the attraction, and I was even there with a bicycle packed with military tactical gear. Regardless, I ended up feeling much safer here than in the bigger towns or cities like Bogotá. People were mostly very friendly and welcoming; a completely different reality that might be imagined about this country. Before continuing, I took some time to get a feel for the area. I still vividly remember my first walk from the hotel, with my recording gear towards the nearby jungle. For the first time, I heard those colorful tropical sounds and saw so many different bird species flying above the tree canopies. Later, I found a hidden trail following the river through the dense jungle. I was following it excitedly while looking for a good place to set up my microphones. There was some traffic noise pollution on this main river, from small wooden canoes, so it was challenging to get a long, pure recording. But in the end, with lots of patience, I managed to get a good portion of it. It was a good warmup for what came after this. Two days after resting, more planning, and eating and hanging out with locals, I was ready to continue my purposeful adventure.

Cycling 20 km to the Amazon rainforest

Day three was the day to get serious. After breakfast, I packed my bicycle and, leaving some of my equipment at the hotel, started cycling the 20 kilometers of unknown dirt roads towards the point where the undisturbed Amazon rainforest starts. My detailed maps and marked points helped me navigate in the right direction. The tropical sun and the weight of all the gear made cycling tough, but I was prepared and had physically trained enough to endure it all. I soon left the town and reached a very remote area. There was a scary realization in the air: ‘I’m actually doing this! Is it a good idea?’ The drive to capture the sound of the Amazon rainforest inspired me and gave me a strong will. Now, there was no way back; I was fully committed to this.

Finding a way into the rainforest was much harder than expected: a maze of dirt roads each led in a different direction or stopped at some house. Eventually, I reached the final finca (ranch) on the edge of the last deforested area. Someone was at home, and was astonished to see a foreigner; this woman gave me some of the sugary water she was boiling (aqua panela). I thanked her and continued, following cattle paths. Before reaching the rainforest proper, I hid my bike in a bush and after repacking my equipment into a backpack, continued on foot for the rest of the way. In this area, only a few water channels and patches of forest remain in the once-pristine jungle. 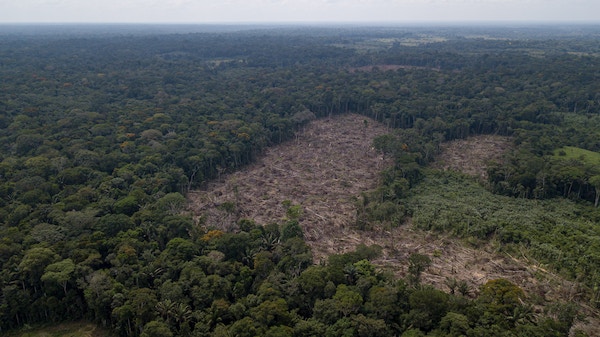 The last areas of deforestation (for the time being). This is the start of the massive, still undisturbed Amazon rainforest.

Inside the Amazon rainforest

After six hours of wandering hidden trails, I finally reached the edge of the vast rainforest. From here, I took my very first step into the Amazon jungle. Here start thousands of kilometers of desolate wilderness. If you get lost here, you really are lost. A spirit of adventure saturated the atmosphere. Soon, I could feel the presence of majestic, ancient energy. I followed my compass, making my way slowly deeper and deeper.  I had a machete for pushing the plants out of the way, not cutting it. A feeling of danger no longer frightened me; any worries I had about getting lost or being by myself had been swept aside by the rush of adrenaline and curiosity that I was feeling. After making my way through the thick jungle for an hour, I found a suitable spot to set up a tent. It was only after stopping that, I truly realized, ‘I’m here all by myself, so far away from home and any real civilization. Being in such a distant, natural place really awakens in you profound primeval feelings. After a while, I felt at home; after all, It’s our planet, Earth.

Spending the night alone in the Amazon rainforest

I set up my hammock and tarp between two trees. In such precious habitats, I take extreme care to make as minimal an impact as possible. For example, when setting up a camp, I could have used my machete to hack away vegetation. Instead, I gently bent the plants out of the way to make a space for myself. A single paracord rope was stretched between two trees. I spread a tarp over the top and attached it to trees and bushes on either side with an elastic rubber cord. This safety and comfort enabled me to focus on the reason I was there: to capture the soundscape of the rainforest.

An extra rope allowed me to hang equipment off of the ground, keeping it away from crawling creatures. Unfortunately, I found out the hard way about the ants. Once everything was in place, there was a strong sense of comfort and safety in this distant, unknown place; the only nightmare was the ants entering the camp. They swarmed around, biting viciously at anything that got close and marched all over my hanging gear, recording gear, and rope lines. As a result of ants crawling on the mics, I had to discard a significant portion of an otherwise fantastic night’s recording. Lessons learned. The afternoon and evening had been spent setting up the equipment and making recordings; it was now around 10 a.m. and time for bed.

I’m used to sleeping alone deep in European forests inhabited by bears and wolves, but I was expecting that sleeping all by myself in the Amazon would be mentally challenging. It turned out that I didn’t really have that modern human fear of this environment; on this dark night deep in the jungle, I fell comfortably asleep. Maybe also because I was so tired but I simply surrender myself to the jungle. 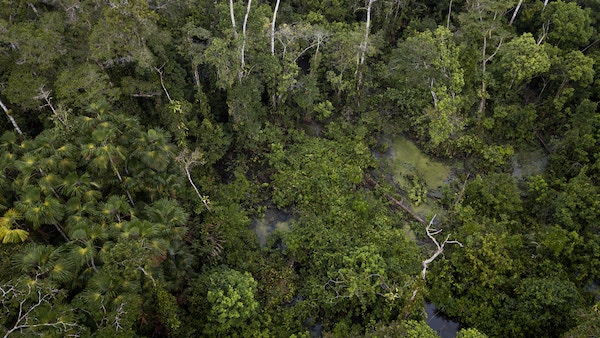 After settling into my campsite, I unpacked and set up my audio recording gear, then started to look for the ideal recording location using a DIY microphone holder attached to a tripod. I chose positions far enough from my camp to not pick up my own noises, but close enough to not lose them in this maze of vegetation. In the late afternoon, I hit record for the first time. By then, the rainforest was starting to get very active. I left the rig and slept in my hammock, leaving the microphones recording all night.

With a compass in hand, I navigated my way back through the jungle, to its edge. After spending time deep in the virgin jungle, returning to the man-made destruction of the deforested areas was an even bigger shock. Here, every tree has been cut or burned down – a situation that is spreading deeper into the Amazon rainforest every day. In a year’s time, the unspoiled jungle I entered and whose sounds I captured may no longer exist. If taken by man, it will be lost forever.

In part two, I will share my experiences of visiting and recording at ancient cliff paintings in the midst of the jungle, and an expedition with a friend to some tepui mountains. 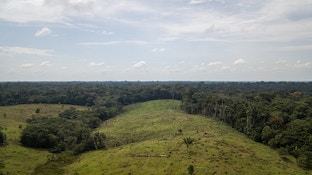 Things learned and to consider next time