Some of the oldest geological formations in South America are flat-topped mountains called tepuis, which in the language of the native Pemóare people means “home of the gods”. When you witness them, this name begins to make sense, and it is no surprise that they have inspired countless books and movies. These rocky wonders rise above the jungle, creating completely different ecosystems that hold a wide variety of wildlife. Their cliffs may harbor many still undiscovered rock paintings made by prehistoric forest nomads as long as 20,000 years ago. The area in the bigger image is part of the Guayana Shield. This is a record of a sound-recording expedition to the Colombian tepuis in the Guaviare Department. 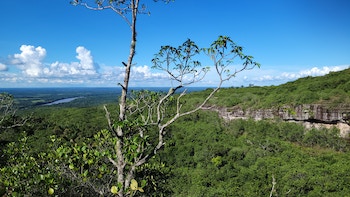 After my first successful expedition to the Amazon rainforest, I was still in Colombia with a strong desire to capture more unique jungle sounds. This time, I was joined by a German guy who also had some wilderness survival experience and a similar desire to explore.

We had met in San José del Guaviare, a town at the start of the Amazon which not long ago was controlled by guerilla rebels, without any official government. Nowadays, as we learned, it is a pretty safe and friendly place for adventure-loving travelers to visit. The idea was to also get involved with and support the local community. Therefore, before our multi-day expedition to the tepuis, we found and hired a local Indigenous guide from the nearby town who took us to ancient paintings hidden in the jungle, while also telling us about local fauna and flora.

Start of the expedition

After our great day trip with the guide, it was time to finalize details and start our expedition to the much less feasible tepuis. From San José town, we cycled along gravel roads through deforested farm areas to a remote fishing village on a river, surrounded by jungle. Here, we found a basic hotel to stay in, where we made a base and left some of our equipment before heading towards the tepuis. However, first, we ended up spending an extra day in the village, becoming friendly with the locals and eating fresh fish. Also, the nearby river environment was unique and full of interesting sounds which I managed to record in the afternoon while following a hidden trail through the jungle.

On the way to the tepuis

The next morning, we loaded our backpacks, ate breakfast, and left the village for the tepuis, which were hidden by impenetrable jungle in the distance. Soon, we left the gravel path and entered the trail-less forest. We were greeted by dense vegetation and rugged terrain which pushed us into action: now it really started.

We followed a small creek of pure water that was flowing down the mountain, creating an immersive, paradisiacal feeling. We wanted to stop and enjoy the moment, but knew that we needed to keep going. As had become normal, we were soon drenched with sweat and needed to use all of our physical abilities to progress through this paradise-like but demanding environment. After about an hour of trekking through the vegetation (we spared the plants by not cutting them with machetes), tepui rock characteristics started to appear. We had to jump and climb up them using a rope, because there was no way around. Some of them truly captivated us. This is unlike anything I have ever seen in the wild

Climbing the rocks
Aside from the jungle, the rocky terrain was an extra challenge

After a tough four-hour ascent, we reached expansive cliffs reaching to top of the tepui. The thick jungle habitat had given way to a much drier, savannah-like environment. Though exhausted, we searched for a location to set up camp for the night. I was eager to finally put down my backpack and begin recording the sounds of this rare and remote ecosystem.

Reaching the cliffs and looking out over the lowland rainforest was a profound experience. Standing on top of those tabletop mountains gave the perfect opportunity to observe the vast jungle from above, as if from an observation tower. Here, the environment was entirely different from the lowland rainforest: a savannah habitat with scrub bushes and flat rocky ground – which made moving around much easier. I’ll never forget the evening we spent atop those formations, looking at the night sky and feeling the ancient energy of that remote place. 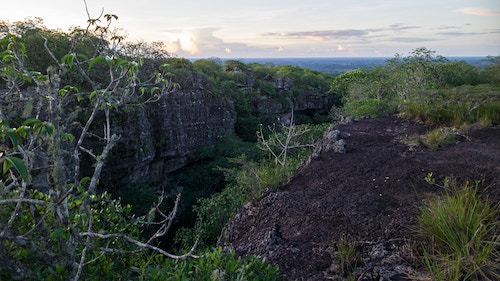 The top of the tepuis, separated by a deep and narrow ravine with running water

Recording sounds from the tepuis

There were many positions to choose from to set up microphones. It was fascinating how much the ambience on top of the tepuis differed from the lowland rainforest: the sounds were much more subtle, with different bird species. The center of the flat mountain was very quiet compared to its edge, where you could hear the distant sounds of the lowland rainforest. In the afternoon, to start the first recording, I set up microphones and a tree at the edge of a tepui cliff. Typically, you can hear the jungle deep within, where the bird sounds are stronger and louder, whereas being made for a unique acoustic ambiance.

Soon, day turned to night and everything became much quieter, with a frog chorus now predominating and occasional nocturnal birds making distant calls from the lowland jungle. I left the recording rig undisturbed for a few hours. Then, in the middle of the night, I retrieved the microphones and moved them under part of the cliff where more rainforest characteristics were present. I wanted to capture the morning sounds in a new location that varied from the one on the mountaintop. In future, it would be preferable to invest in two recording sets, to capture even more (diverse) sounds from two locations at once.

The next morning, after the full-time recording, we packed our gear, making sure not to leave any trace, and started to head across more tepuis, towards a valley. We took a different route to the way we had come. That seemed great for reaching more undisturbed locations, but it turned out to also be difficult as we were faced with maze-like tepui structures.

We soon reached an area where cliffs and ravines created almost impassable conditions – at least not without rope or the power of flight. I had never been in such a mysterious and disorientating place before. Everywhere, there were deep ravines and holes, each separated from one other, each containing its own little habitat. Despite needing to cross them, we also wanted to descend into and explore them all. As our gear and energy did not allow that, we just admired them from above. 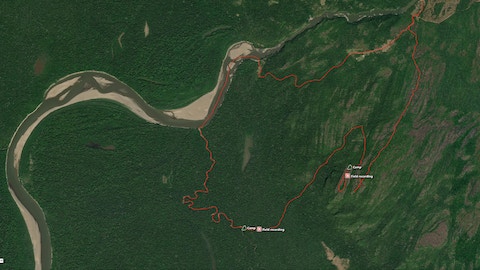 Back in the lowland rainforest

After many hours, we managed to successfully overcome the tepui maze. However, we still had to traverse thick jungle to get to the small river which was our goal for the day. After the disorientation of the rock labyrinths, moving through a lowland rainforest was like a walk in the park. It didn’t take long to reach our goal, where we set up camp and I was able to record sounds from this environment, which was completely different to what I had been hearing for the last two days. We stayed the night, and I was able to record more lowland rainforest sounds. After we cleaned up our camp, we used an inflatable packraft belonging to my friend to travel downriver all the way back to the fishing village we had started from.

Tepuis are a unique natural phenomenon occurring in the South American Amazon with great importance for holding and preserving a highly biodiverse habitat. With their high cliffs and rocky tops, they form a natural protection from human encroachment further and further into the Amazon rainforest. Nevertheless, the lowland jungle at ground level around the tepuis is greatly endangered, mostly by farming. Our expedition to this area acted as a preview of Serranía de Chiribiquete National Park, as we were near its borders, where the environment is very similar.