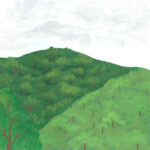 Night falls in the cloud forest. Several species of frogs congregate in humid areas, from jungle lakes to the smallest puddle. The soundscape is not as full on as in a lowland rainforest, which makes it much crisper and enveloping. Each discrete wildlife call seems to linger in the air for a fleeting moment, aided by the beautiful acoustics of the Afromontane forest. Conversely, the more drawn out or continuous calls offer a nice backdrop that’s very easy to ignore until there is a sudden pause.

My aim here is to record the rich dawn chorus soundscapes, but discovering these nocturnal frogs is a beautiful and unexpected result of my approach to sound recording. As usual, I set up several sound recording rigs in promising areas that I’ve scouted previously. I leave the microphones out for 24 to 48 hours at a time, which is more than enough for wildlife and nature to go back to its normal state after I’ve been there and affected it with my presence.

During the day the frogs don’t call much, but the cloud forest is alive with the sound of insects, birds and sometimes mammals. After dusk most birds take refuge and the scene is taken over by nocturnal inhabitants. Occasionally you can also hear a disturbed troop of baboons or Colobus monkeys call in the distance. Towards the end an African wood owl starts wailing softly. Perfect soundscape to fall asleep in the forest.