First Stirrings of First Light in a Pine Forest 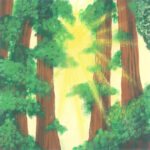 An unedited, unprocessed excerpt from an attended (listening meditation) night-to-dawn recording made in a small pine forest on the Fleurieu Peninsula, South Australia. Most, if not all, pine forests here are plantation forests of introduced pine species; and most tend to be adjacent to large tracts of pastoral land for the grazing of cattle and sheep. Different pine forests can have quite different acoustic effects. There is also a significant difference between sounds entering the forest from beyond its limits (such as the occasional calls of cows and sheep that can be heard in this recording, and some of the more distant bird calls), and those produced within it (such as the various native birds that can be heard in this recording, including Australian Magpies, Australian Ravens, and, in particular, the fairly nearby song calls of a Fan-tailed Cuckoo). Recorded on land of the Kaurna and Ngarrindjeri peoples.